The Library building is open to current RWC/NES faculty, staff, and on-campus students.

The 2016 Library of the Year winners are:

The 2016 honorable mentions are:

As written on the RRLC website: "1,443 people submitted nominations for 68 different libraries. Nominators poured out their love for their library.  'It was the most difficult year yet to choose just one winner,' said Todd Butler, President and CEO of Causewave Community Partners, one of the judges. Other judges for this year were: Marion French, Assistant Vice-President of Education and Interactive Services for WXXI, Debby Emerson, President of the New York Library Association and Executive Director, Central NY Library Resources Council, NY, and Barbara Stripling President-elect of NYLA, former ALA President, and Assistant Professor of Practice, iSchool, Syracuse University."

The Golisano Library Team wishes to congratulate the other 2016 winners, particularly Charles J. Meder Library at Finger Lakes Community College! We would also like to thank the faculty, staff, students and community members of Roberts Wesleyan College and Northeastern Seminary for your heartfelt nominations which earned us this honor! It is our pleasure to serve every single one of you.

To celebrate, the Golisano Library Team was invited to attend the annual meeting of RRLC at Casa Larga on June 2nd. Below is a photo of (most of) the team accepting our award. 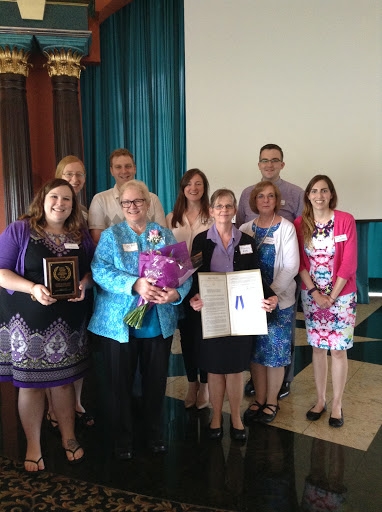